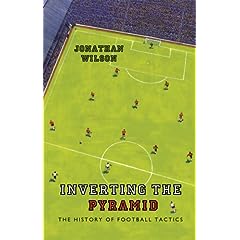 Jonathan Wilson, who writes a detailed and thought-provoking blog on the Guardian website, has written perhaps the most talked-about football book of the last few years in Inverting the Pyramid, and your tragic correspondent has finally gotten around to reading it.

There is no debating the book's importance. Wilson set himself the task of presenting a comprehensive history of the evolution of football tactics, and the result is a fascinating, informative and provocative volume whose small faults are far outweighed by its virtues. It deserves, in fact, a comprehensive review: herewith an overview, and a look at some details in future instalments.
In less capable hands, a history of tactics could have been disappointingly dry. However, Wilson manages to work in plenty of anecdotes and character sketches in the midst of his clear descriptions and sharp analysis. He is awake to the wider context of the game as well, but instead of the prolix sociological ramblings of David Goldblatt, there are simply brief and apposite references to the cultural background of various football innovations.
Significantly, where Goldblatt regularly seeks comparisons with politics and the theatre, a favourite analogy of Wilson's is chess, which fits his theme well. (Incidentally, it's interesting that some trends in the world of chess echoed those of football...for example, Italian catenaccio reached its apogee during the reign of the ultra-cautious Tigran Petrosian as world chess champion in the mid-sixties. Petrosian, incidentally, was a dedicated football fan. But I digress.)
Occasionally Wilson gets polemical, particularly regarding the continual failure of English football to acknowledge and learn from the developments taking place beyond the channel. In the second of two chapters named "The English Pragmatism", the authorial voice comes through particularly strongly, with Wilson launching a withering attack on the progenitor of the long-ball philosophy, Charles Reep, and his influential alumnus, Charlie Hughes. Not that this attack is at all unwarranted.
Elsewhere, value judgements are few, and there is a sensible admission that "negative" tactics can be legitimate when teams have fewer resources than their peers. Wilson's reach is broad, and although he spends a little too much time documenting the developments in the former Soviet Union, at the expense of (for instance) France and Germany, the breadth of his coverage is impressive.
The diagrams dotted throughout the book are both welcome and detailed, especially as the book moves towards the present, and greater fluidity becomes the norm. There is also a liberal (occasionally excessive) sprinkling of quotes, and these recollections from the practitioners and inventors of tactical systems provide plenty of colour.
There are the usual few typos and misspellings, not to mention a couple of factual errors (including an absolute shocker on page 297), but these are minor flaws in the broad scheme of things.
Still to come: a look at some of Wilson's specific analyses, with some tragic reflections.
# posted by Mike Salter @ 11:57 AM

Comments:
This book has been on my "to read" list for over a year now. Must now actually get round to reading it. Really enjoy Wilson's comments both in the Guardian and on the Football Weekly podcast so it's no surprise that he has put together a well written book.

I've ordered this book some weeks ago recommended by others. It seems I won't be able to get it until March!

I'm interested in your perceptions of the book, Mikey. Good idea to put it on your blog.

Is that you, Mr. Wilson?

In which case, allow me to compliment you once again on your excellent book, and the always informative Guardian blog!

Professionalism was finally sanctioned in 1967, and, in the aftermath of Sweden's failure to qualify for the 1970 World Cup...

Quite right: a howler. Sorry. I suspect I probably intended to write 'qualify for the quarter-finals of the 1970...'. But I didn't. Thanks for letting me know. At least the Dutch edition will have it right.